In Kapilavastu there lived a Brahmin named Kukkuripa. Puzzling over the problems of existence, he came to place his trust in the Tantra, and in time chose the path of renunciation. He began his itinerant career by begin his way slowly toward the caves of Lumbini.

One day, on the road to the next town, he heard a soft whining in the underbrush. When he investigated, he found a young dog so starved he could no longer stand. Moved to pity, he picked her up and carried her with him on his long journey, sharing the contents of his begging bowl, and watching with delight as she began to grow strong and healthy.

By the time they arrived in Lumbini, Kukkuripa had become so accustomed to her affectionate, good-natured company that he could not imagine living without her. And so he searched for an empty cave large enough for them both. Every day, when he went out begging, she would stand guard, waiting patiently for his return.

So deeply involved was Kukkuripa in the continuous recitation of his mantra, that twelve years pass as quickly as one. Almost without realizing it, the yogin attained the magical powers of prescience and divine insight. But the gods of the Thirty-three Sensual Heavens had taken notice. In fact, they were so impressed that they invited him to celebrate his achievements by visiting their paradise. Flattered, and amazed by their attentions, he accepted the invitation and embarked upon a ceaseless round of self-indulgent feasting and pleasure. On earth, his faithful dog waited patiently for her master to return. Although she had to root around for whatever she could find to eat, she never strayed far from the cave.

And, in truth, she was not forgotten. Despite his luxurious existence, Kukkuripa sorely missed his loving companion. Again and again he told the gods that he needed to return to the cave to care for her.

But his heavenly hosts urged him to stay, saying: “How can you even think about returning to a dog in a dark cave when you are enjoying our good favor and every luxury and comfort we can offer? Don’t be so foolish—remain with us here.” Time and time again, Kukkuripa allowed himself to be persuaded.

But one day when he looked down from the Thirty-three Heavens, he realized that his loyal dog was pining for him—her eyes were sad, her tail drooped, and she was so thin he could see her ribs. Kukkuripa’s heart ached for her. Then and there he descended from paradise to rejoin her in the cave.

The dog leaped and pranced with joy when she caught sight of her beloved master. But no sooner did he sit down and begin to scratch her favorite spot, just behind the ears, than she vanished from sight! There before him, wreathed in a cloud of glory, stood a radiantly beautiful dakini.

“Well done!” she cried. “Well done! You have proved your worth by overcoming temptation. Now that you have returned, supreme power is yours. You have learned that the mundane power of the gods is delusory, for they still retain the notion of self. Theirs is the realm of fallible pleasure. But now your dakini can grant you supreme realization—immaculate pleasure without end.”

The she taught him how to achieve the symbolic union of skillful means and perfect insight. As an irreversible, infallible vision of immutability arose in his mindstream, he did indeed attain the state of supreme realization.

Renowned as Guru Kukkuripa, the Dog Lover, he returned to Kapilavastu, where he lived a long life of selfless service. And in due time, he ascended to the Paradise of the Dakinis with a vast entourage of disciples. 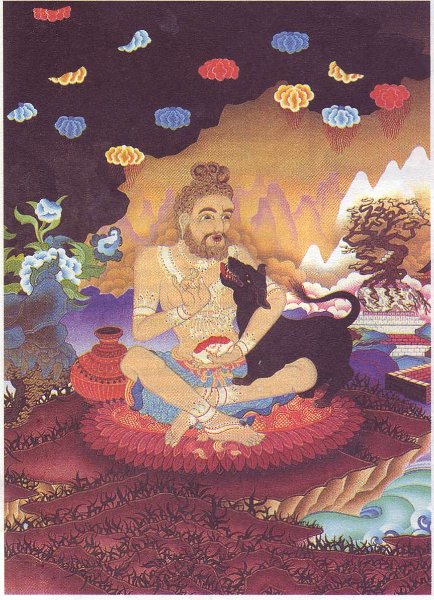